Over 130 Years of Worship, Community, and Service

The Church, and particularly Saint Andrew’s, is made of people in relationships—not artifacts, architecture, or even actions such as kneeling, singing, or making the sign of the cross. Since 1891, a large cross-section of our community has called St. Andrew’s “home.”

It all began in when three women founded an ecumenical Sunday School in South Greensboro, then considered separate from Greensboro. They met first in private homes, then in various public rooms in local stores. As women could not legally make contracts or hold church offices at that time, their husbands were appointed as the officers of the new mission. Several of these men were members of the Brotherhood of St. Andrew’s, an international lay Christian organization dedicated to community service and prayer. In scripture, Andrew is fishing by the sea when Jesus calls him and his brother, Simon Peter, to be his disciples. Later, Andrew brings the boy with the loaves and fishes to Jesus, who multiplies the offering to feed a hungry crowd.

By 1893, the mission became a self-supporting parish. A building was erected on the corner of Lee (now Gate City Blvd.) and Arlington Street. As the City grew west, the church moved with it—building and all! The little frame American Gothic building was dismantled and reassembled on Sycamore Street where the Government Center is now. Many of the furnishings in the current chapel are from that building, including the altar that was a gift from the Church of the Incarnation, a mission of Trinity Wall Street in New York City. In 1903, St. Andrew’s installed Greensboro’s first pipe organ and vested choir. A vested choir reflected our oneness rather than any need to be fashionable! 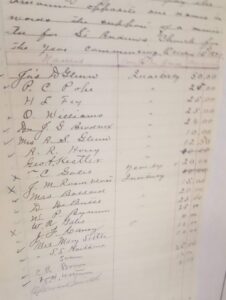 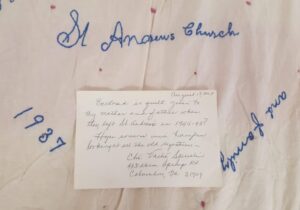 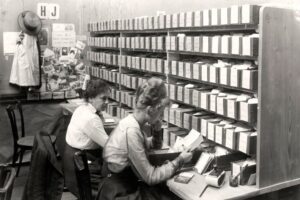 The earliest meeting minutes from our Ladies Aid Society indicate preparation for the bazaar, an annual event said to be the oldest church bazaar in Greensboro. Now named Deck the Halls, this December event gathers and unites the parish and community, with proceeds dedicated to outreach activities and community organizations.

In the 1930s, the Rev. Gene Vache had a vision of a church located on a hill where the steeple could be seen over all of Greensboro. St. Andrew’s owned a new property and had blueprints for a stone church. But as we waited for the new building to begin, the older building aged and deteriorated. Broken chairs fed the furnace in lieu of coal some Sundays. After the war, inflation devoured the building fund and dictated a fast build. The original plans were sold to Holy Trinity Episcopal Church and the colonial-style brick building (now our Chapel) was built on the corner of Tremont and West Market Streets.

Even before the move into the new space in 1948, St. Andrew’s had a Sunday evening youth organization. Known as the Young People’s Service League, it attracted teens who enjoyed the opportunity to socialize and participate in community service. Some of our oldest members remember volunteering at the local polio hospital with that group as teenagers.

Rapid growth in the 1950s led to the need for a larger worship space. The leadership believed that seating for 300 was the optimal size, allowing for the parish priest to know all of their parishioners, with a chancel spacious enough to enable every teenage boy in the congregation to serve as an acolyte every Sunday and every teenage girl to sing in the choir.

The St. Andrew’s commitment to service has continued to grow through the years. For many years, it housed a food pantry that it still supports (even though the pantry has moved across the street). A capital campaign allowed for much-needed upgrades and improvements. St. Andrew’s has sought creative ways to care for creation, including the recent installation of solar panels. And St. Andrew’s reached out to both members and community in big and small ways throughout the coronavirus pandemic. For over 130 years, St. Andrew’s has been defined not by its building, but by its commitment to worship and service. 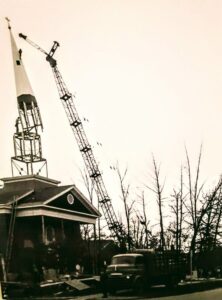